I look out of the kitchen window, almost distracted by the snowing rapidly turning into a snowstorm. Whispers continue, I take a closer look, and out of the fog created by the snow emerges two white neon eyes. Bang! I am on the ground, ears ringing, teeth aching, body crumbling. Everything hurts! The lights began to flicker as a woman’s scream erupts from the dining room. I try to stand up whilst my body is still feeling as if it had been drugged. I try and get some type of support around me, the lights stop flickering as I hear sobbing further into the dining room, almost muffled. My hand clutches to the side of the opened door frame as I enter. Blood. Oliver was standing near a red stain on the carpet. It was new. His face was covered in splattered dark red liquid as his mother was on the other side of the dinner table, sobbing.

Oliver’s uncle, Dave, rushed forward to comfort Jessica as he seemed confused.
I grab Oliver by the shoulders and slowly but surely get close.
“What happened?” I asked. He stood silent, is if he was in shock.
“What happened!” I yelled.
“He was right here” he muttered. “Who?” I respond. “My father.” he said.
This wasn’t wine or some kind of juice, it was pure blood. I move back in realization.
A horrible stench started to form, from, somewhere.
“Step back!” Jessica yelled. And so Dave did. I sat down on the couch, I thought of it as a prank, since Dave was closest to the power surge and Dave and Oliver’s father usually do this kind of stuff. But then, how do I explain the white soulless eyes from outside. I heard stomping footsteps come towards me.
“Is this a twisted joke?!” Jessica yelled. “What? No, no, no, I was in the kitchen until I heard you screaming and I thought that something happened.” I proclaimed. Her eyes was focused on me, like if she was a vulture and I was the prey. She began to question her own mind-set. I grabbed the TV-remote, and turned it on. The cable was off. “What? Are you kidding me? The TV doesn’t work?!” I yelled. “Give me that.” Dave said. As he stood above me I heard the mashing buttons. Dave looked utterly confused as he knew that the TV worked a few minutes ago. The TV started emitting a black and white light as sparkling sounds emerged with it.
My head started to hurt, but not too bad in general. The damage I took in the kitchen was much worse. Pictures started to frequently appear in my thoughts. It was that… Things. The eyes still haunt me, even if it was just a few minutes ago.

BANG! The door slammed open letting some of the snow inside.
I started shivering as my ears started to ring. Jessica sighed. “So he has been outside all of this time huh?”
She walked towards the door and started to talk. “It’s okay honey, you can come back in now, the prank is over.” She got no response. She walked two steps outside, and started to get frustrated. “This isn’t funny Bradley, get back inside now!” The door slammed!
“Jessica?” I asked. Dave charged towards the door and attempted to open it. He looked down at the ground as anger turned into fear. Blood started pouring from the space inbetween the door and the floor. Oliver still stood at the same spot, even if I bumped into him after trying to walk backwards after seeing the blood. Dave tried to think of an explanation, attempting to dampen his fear. “This… This could just be, uhm… This could be some kind food colouring? They are probably making ice cones?” He said whilst looking insane. He took his index finger and plunged it into the pile of blood near the door. He took a taste. His stomach rumbled as his face turned green. He ran towards the bathroom, as I stood terrified, knowing that it was the thing he didn’t want it to be. My face turned pale as the pictures were appearing once again. Lisa ran down stairs as she had a worried expression on her face.
“What happened to Dave?” She confusedly asked.

She stopped in her tracks.
Her horrified expression was hidden by her hands covering her face.
She went into the kitchen, and prepared the faucet to assure herself that she was seeing correctly. She splashed water into her face, and dried her face with a towel that was hung on the cupboard handle. She looked up through the window. She saw something. Something, indescribable.
Lisa turned on the sink blender whilst her sight was still focused through the window. She slowly bent over, nearly making the blender grab her hair.

I ran towards the kitchen, blinding the sight of the kitchen window with my left hand. Tears ran down her face as she realized what she almost did. But that didn’t stop her. As her attempts at escape were in action, footsteps went down the stairs. Dave entered the dining room and saw what was happening. He took off his hoodie, and held her down as I took off mine. We tied her to the dark oak wood table. Sweat ran down her forehead around her eyes as her empty glaze was directed towards the still rattling sink. Dave went to turn it off as I noticed.
Everything was gone, every trace of anyone. The blood was gone, the stain on the carpet, even Oliver was gone. A horrible smell started to build up from an unknown source. Dave entered the room as a breeze emerged from upstairs. It was almost identical to the whispers I heard the first time I saw the thing from the window.

We decided to ignore it. We took a seat in front of the TV as time flew by.
Dave decided to take the night watch on Lisa as she still struggled to remove the hoodies tied around her. I took a cup of coffee after I closed the kitchen curtains. We made some adjustments to the hoodies and added a few things, just in case. The lights went out permanently. After a while we could hear the hot wind blowing from the corner of the room stop. The radiators were off. We both took everything that we found to keep us warm, and we split it in two so that we got an equal share of warmth. The clock was 11 pm and we were incredibly tired. He promised that I'd get to sleep. So I told him goodnight as the cold almost enveloped us both.

I woke up, thinking it was an early morning. But the light has still not passed through the thin curtains. I look to my left, expecting to see Dave.
He was just. Gone. Lisa was gone as well.
The sheets and pillows to keep us warm were gone.
My breath was cold, yet my body felt nothing.
The whispers from the breeze flowing down the stairs once again emerged. I ignored the whispers, making myself believe that they were just a normal thing when wind went through a thin gap. I turned myself towards the TV. It was still unable to get a connection to anything.
I could swear that I saw the eyes on the TV. The lights were on, somehow. And I had the determination to go and find out what was going on. First I needed to find the source of that reeking stench coming from upstairs. My method of finding it was to find the spot where it smelled the worst.

I went upstairs after searching the bottom floor.
The stench got to the worst possible level of smell when I got close to the attic roof door. All I had to do was to find the key so that I could get the ladder down so I could go up and have a look.
I knew that I would usually put the key in my bedroom closet.
I opened the door which revealed that the room was pitch black to the point that I was brighter than the surroundings. I tried to go throughout the room by touching everything I went by, like a blind person.
After I finally found the closet a strange creaking noise came from behind me. I look behind to see the attic roof door close quickly, as if someone closed it to not be seen. I grab the door handle to the attic as it folds open down to my feet. I climbed up and stuck my head up to see if anyone was there. I found the source.

I stood on the close to breaking wooden floor to see an open window letting in a pile of snow. And the bed sheets covering what was behind it.
I pinch my nose as I prepare to remove the sheets hung on the right corner of the wall by a single screw. I remove the loose screw on the left wall to reveal everything. I step back with my eyes twitching in disbelief.
“J-j-Jessica? Olli-iver?” They have been torn apart.
All of the people invited, had their organs, spinal chords and feet.
All of their skeletons were formed and shaped like religious symbols.
A creak came from behind me as I saw my shadow get cast by a weak white light. A stone-cold breath fell upon my neck as I knew that my doom. Was certain. 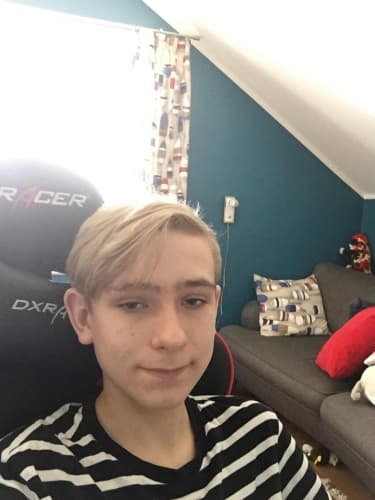