She swayed on the line, holding her umbrella. Her blue hair burned in the moonlight. She chewed gum and her eyelids sparkled from glitter. Her pink costume and her ballet shoes and her leggings, all glowed like silver. Her lips were painted with pink lipgloss and her blue eyes glowed like sapphires. "I like walking the line, and I like the pink icecream with sparkles." She walks the line, unafraid, and smiles. The crowd cheers. The night is covered in stars, like someone pulled down a curtain with stars on it. It shone and sparkled, the night. A nightingale sang and some dog barked, a bulldog, and a cat meowed. She walked the sweet grasss while some bluebird sang. She laughed and chewed her gum. Millions of stars outside sparkled and shone like diamonds and crystals on a womans ear.
Marilyn Monroe sat on the space, dangling her legs, laughing. She walked inside. Her pink room was lit up by faerie lights andf her cat slept on a cushion. Jupiter it was called. She slept on the bed, until morning. She then awoke to loud singing outside, from a bluebird and someone was cutting the lawn. The girl hurried to her bathroom and brushed her teeth and put makeup on. Then she called her friend. The friend and her decided to meet in a restaurant and discuss what they were going to do. She put her necklace on wiith all the spikes and she combed her hair and put the pink wig on. A picture of a Victorian lady and a nightingale was on the wall on the bathroom and a feather and some faerie pictures. She hurried out, taking her neon blue Star trek suit. She wore it. Chewing her gum, she left.
Her friend and her sat in the restaurant. They sat there, on a pew, drinking coke and eating burgers with french fries and dressing. Her friend wore a pink neon suit and rainbow hair. They talked about the situation of their lives, of the line dancing and the band and the poem she had written about a girl that swings in space on a swing of stars. Until the door gave way and a man walked in, with black long hair and eyeliner. And high boots. Julee looked up to her see her true love standing there, his black coat wet from the rain and his big brown eyes filled with stars and tears. Julees friend smiled at Julee, who just stared. 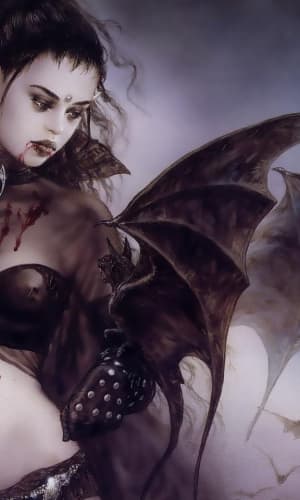